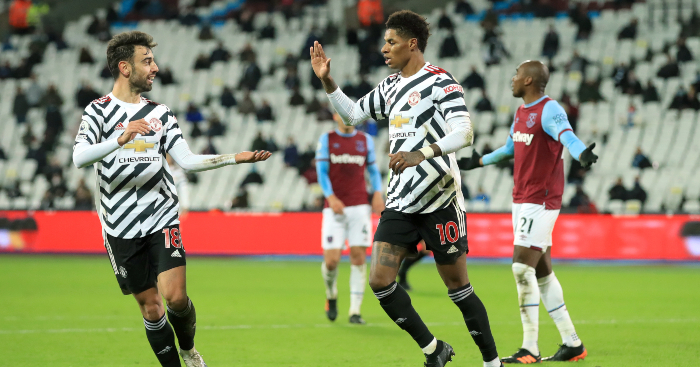 Marcus Rashford and Bruno Fernandes were the catalysts for Manchester United‘s comeback against West Ham on Saturday, and only the post denied the duo from adding to their impressive numbers this season.

With one eye on the crunch Champions League clash with RB Leipzig in midweek, Ole Gunnar Solskjaer left both men on the bench for United’s trip to West Ham.

But the Red Devils struggled in the first half at the London Stadium and were lucky to be trailing just 1-0 after the Hammers missed a host of chances.

The duo were called from the bench at half-time and inspired United to an eventual 3-1 win, with Fernandes breaking a 2020-21 Premier League record in just 45 minutes and Rashford scoring his side’s third goal to wrap up all three points.

Rashford almost made it 3-1 six minutes before he eventually scored, latching on to a superb Fernandes through ball but seeing his shot come back off the post.

These two are proving a lot of fun to watch in tandem. Don’t hide them away on the bench please, Ole.