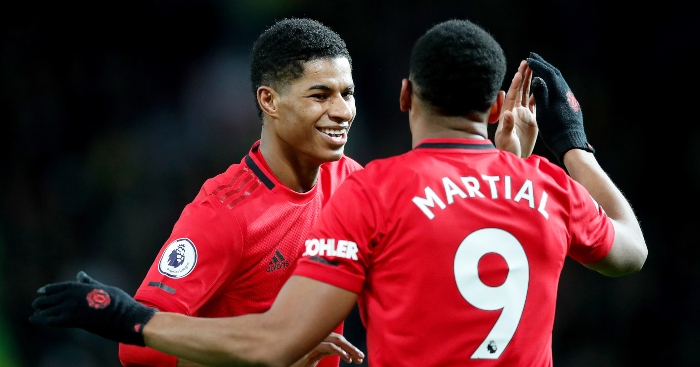 Marcus Rashford scored twice in Manchester United‘s 4-0 win over Norwich – but his highlight of the game was a stunning piece of skill in the first half.

The United forward has been in brilliant form this season, and he found himself in the box being tightly marked by Norwich’s Todd Cantwell and Sam Byram.

Rashford then channelled his inner Ronaldinho as he produced a beautiful elastico to get past them before his cut-back was intercepted.

Marcus Rashford has been one of the best players in the Premier League this season and moments like this just highlight how confident he currently is.pic.twitter.com/GtrwNz5QuZ

The 22-year-old was making his 200th appearance for United, and he stabbed Juan Mata’s cross past Tim Krul to put them in front.

Rashford doubled United’s lead in the second half when he converted a penalty after Brandon Williams was brought down in the box by the Norwich keeper.

The winger now has 19 goals and five assists in 30 appearances for the Red Devils in all competitions this season.