Watch: Marcus Thuram is sent off for spitting in Stefan Posch’s face 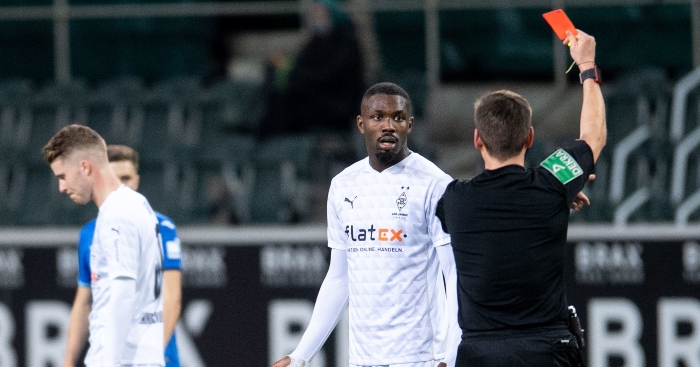 Spitting in somebody else’s face isn’t exactly the smartest of things to do at the best of times, doing it during a pandemic is a shameful decision to make.

Still, that is exactly what Marcus Thuram did during Borussia Monchengladbach’s match against Hoffenheim.

The France international, son of World Cup winner Lilian Thuram, had a coming together with Stefan Posch after getting a word from the defender – having gone down fairly easily under limited pressure from the Hoffenheim defender.

Thuram could have easily walked away from the situation without making much of an incident out of it, but he spat in his opponent’s face instead.

Brandishing a red card to the 23-year-old is likely one of the easiest decisions this referee has ever had to make following a VAR check.

When watching the video, it’s hard to believe that Thuram actually chose to do this, especially considering everything that is currently going on in the world.

Thuram’s sending off was made even worse for Monchengladbach when Hoffenheim made the most of their man advantage as Ryan Sessegnon scored an 86th-minute winner.

Marcus Thuram sent off for spitting at Hoffenheim’s Stefan Posch today – a really petulant move in the middle of a particularly intense moment in the pandemic in Germany & beyond. pic.twitter.com/oW1SbaNU6u

Watch: Gladbach players react ecstatically after going through in CL