Watch: Mark Clattenburg stars in new sitcom taking the p*ss out of VAR 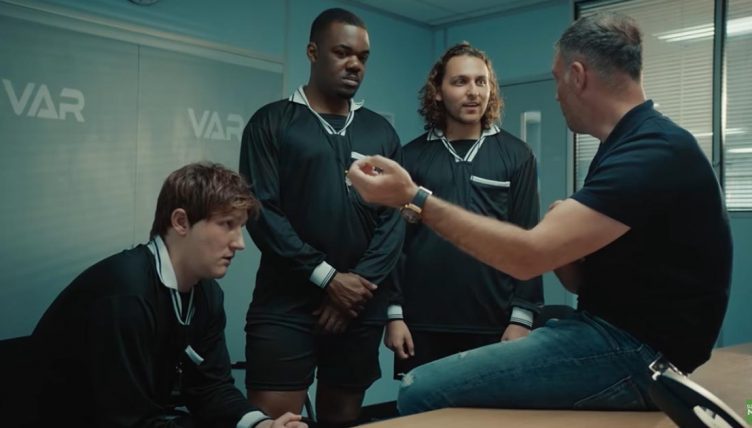 Paddy Power have launched a new sitcom purely to take the p*ss out of VAR and we couldn’t be happier.

Regular readers will know we got very into their Pundits sitcom last year, mainly because of the surprise comedic genius that is Alan Curbishley.

So imagine how excited we were when we heard they were returning with a full-length sitcom and that Curbs was coming back. Kids at Christmas springs to mind.

He isn’t in this first episode sadly, but Mark Clattenburg is the latest breakout star, turning up to offer some words of wisdom to the VAR team – “try not to make the referee look like a total tw*t” – talk through his tattoos and slag off the FA Cup final. That’s a genuine laugh-out-loud moment.

We may have been spared any VAR disasters courtesy of it being sensibly applied at Euro 2020, but its use in the Premier League has certainly got us all talking over the past year – and will no doubt continue to do so.

And in The Var Room, Paddy Power take us behind the scenes at Stockley Park in a spoof sitcom, perhaps in an attempt to explain just how there have been so many f*ck ups using it in the Premier League.

Starring Anthony Richardson, Tendayi Jembere and Ashley Margolis as the useless VAR team, one of the first lines of the episode, “I literally haven’t got a clue what to go with here,” pretty much sums up how we all imagine it goes down.

Mark Davison plays the boss and has some of the best moments in episode one with his bewildering looks to the VAR team. His past career history is a nice nod to reality, too.

If your team has ever been on the receiving end of an unexplainable VAR decision, maybe this has the answers you’ve been looking for, with the justification for dodgy decisions being things like, “This game is dead boring, give him a red card and see what happens,” or even personal vendettas against certain players.

The witty sitcom certainly has its moments and we’re looking forward to seeing what’s coming next in the four-part series.

With future guest appearances from the likes of Teddy Sheringham, Paul Ince and our man Curbs, there should be plenty more to come.

It’s available to watch via Paddy Power’s YouTube channel and is set to be streamed on Amazon Prime later this month.