Watch: Martin Keown says things are as bad as he’s ever seen at Arsenal 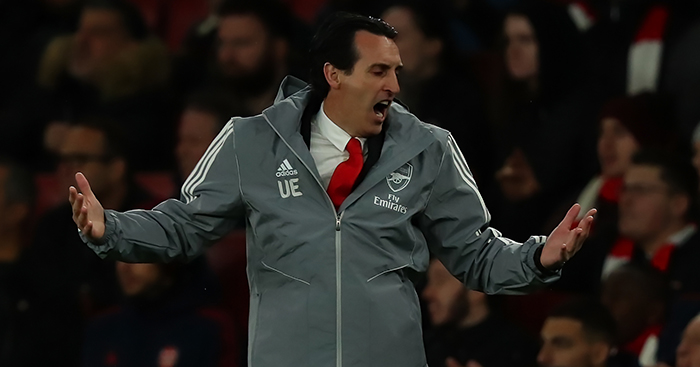 Martin Keown says things are as bad as he has ever seen at Arsenal after they were beaten in the Europa League at home by Eintracht Frankfurt on Thursday.

Arsenal have now gone seven games without a win in all competitions, making this their worst run of form since 1992 under George Graham.

They actually took the lead against Frankfurt through Pierre-Emerick Aubameyang just before halt-time, but Daichi Kamada scored twice in the second half to intensify the pressure on Unai Emery, who left the arena to jeers from a sparse crowd.

And speaking on BT Sport after the game, Keown and John Hartson were scathing about Emery’s management of their former club.

“That was woeful,” Hartson said. “There was no urgency, very lacklustre, they looked like they had no direction from the manager in terms of how to play.

“They’re a goal down, they bring on Torreira, a defensive midfield player, when they’ve got Pepe and Lacazette on the bench.

“I want to see Aubameyang playing down the middle. You’re 2-1 down, he’s staying on the right-hand side. He’s your centre-forward, he’s the one who’s going to get you a goal.

“On the back of that performance, Unai Emery, they’ve got to be asking questions about his job now.”

Keown, meanwhile, went even further and believes things will only get worse if the club sticks with Emery.

“I think he may well have taken the team as far as he can,” Keown said. “We just witnessed an absolute shambles of a performance in that second half.

“The team selection, the team motivation, the substitutions, the performance, everything was missing here. It was a dreadful performance.

.”The fans turned many years ago on [former manager] Terry Neil, 37 years ago. I was at the club when it happened and things got very toxic. I think we are getting close to that again.

“The manager may be in a position where he might feel he needs to step aside now. Serious questions need to be asked. This is as bad as I have seen it.

“This is relegation form. Decisions need to be made, otherwise the club is going to plunge further down the table.”

Watch the full post-match reaction from Harton and Keown below.