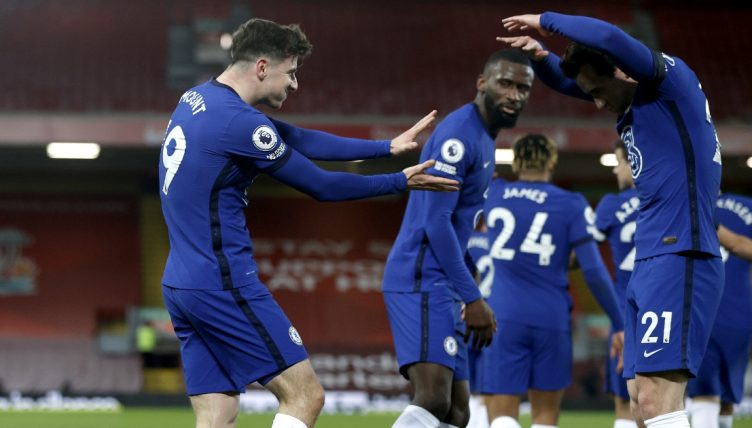 Mason Mount was on target again for Chelsea on Thursday night as they beat Liverpool 1-0 at Anfield, inflicting a fifth successive home defeat on the Reds for the first time in their history.

Timo Werner had already had a goal narrowly ruled out for offside, while Sadio Mane wasted a golden chance at the other end before Mount finally fired Thomas Tuchel’s men in front just before half-time.

Collecting a long ball on the left wing, the England international faced up to the returning Fabinho.

Keeping his eyes fixed firmly on the ball, he quickly shirked the attentions of the Liverpool man, working enough space to fire a perfectly arrowed shot past Alisson and into the bottom corner.

It proved to be the winner and the three points fired the Blues back into the Champions League positions.

Mount is a man appearing to grow in confidence with every game and his goal celebration spoke to that too.

With the help of Ben Chilwell, he produced a Dragonball Z inspired move, pretending to throw a fireball at the left-back.

After the game, Mount revealed that he did the celebration for Kurt Zouma, saying that the Frenchman is always watching some form of Anime when the team travel.

🗣 "Me and Chilly sit behind Kurt Zouma on the plane and he's always watching Anime." 📺 ☄️@masonmount_10 dedicated his celebration with @BenChilwell to teammate @KurtZouma 🔵 pic.twitter.com/1ELnHiydAI