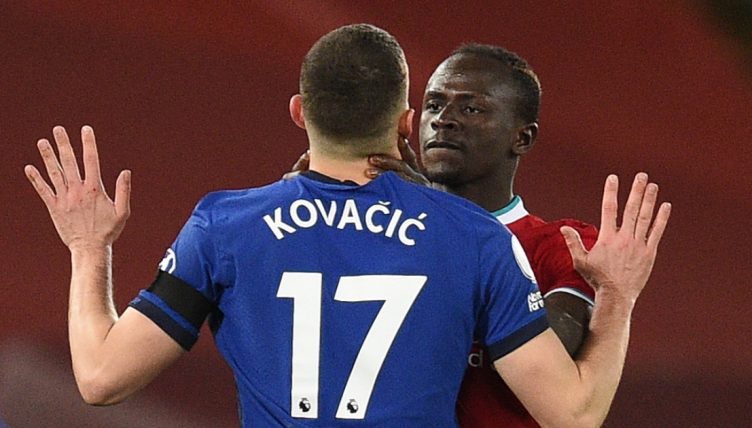 Chelsea leapt back into the top four on Thursday night with a 1-0 win away to Liverpool, with a Mason Mount goal just before half-time enough to take all three points.

Mount fired in an excellent finish after Timo Werner had already had a strike of his own ruled out for a marginal offside, helping to maintain Thomas Tuchel’s unbeaten record in the process.

It completes what will be seen as a very good week for Chelsea, picking up four points from a possible six against fellow big-hitters after drawing 0-0 with Manchester United on Sunday.

Mount was not the only Chelsea midfielder to do something noteworthy against the Reds, however.

In the second half, as Liverpool pushed for an equaliser, Sadio Mane and Mateo Kovacic found themselves in a tussle, with Mane eventually being awarded a free-kick after hitting the deck.

As he lay on the floor, the Croatian saw an opportunity for some prime shithousery, choosing to kick the loose ball at his opponent’s head.

Unsurprisingly, Mane did not take it very well.

Top 5 Shithouse Moments of the Season. Coming in at number one we’ve got Mateo Kovacic absolutely twatting a ball at Mane’s head while he’s on the ground. pic.twitter.com/kXJZLlu9P4