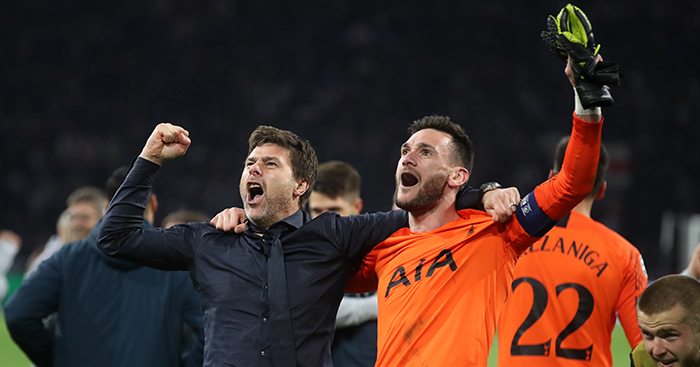 Tottenham came from 2-0 down on the night and 3-0 on aggregate to sensationally beat Ajax in the Champions League semi-final on Wednesday night – and Mauricio Pochettino could not contain his emotion.

Trailing 1-0 from the first leg in north London the week before, Spurs must have feared their chance of reaching their first Champions League final were over when Matthijs de Ligt and Hakim Ziyech scored to put Ajax 3-0 ahead in the tie with just 45 minutes.

However, following in the footsteps of Liverpool the night before, Spurs did the impossible, with Lucas Moura scoring twice in four minutes to level things up on the night before the hour mark and then, incredibly, scoring a winner to complete his hat-trick in the sixth minute of stoppage time.

Pochettino was among those going crazy when the ball hit the net, but once the final whistle went and the enormity of what he and his players had achieved struck him for the first time, so came the tears.

Watch the amazing scenes at the end of the game below.

We can't do this anymore! 😂

There's no words for this.

A night no one will ever forget ❤️ pic.twitter.com/Rt2VYWiEag