Watch: Messi gets spooked by fireworks after parading Ballon d’Or 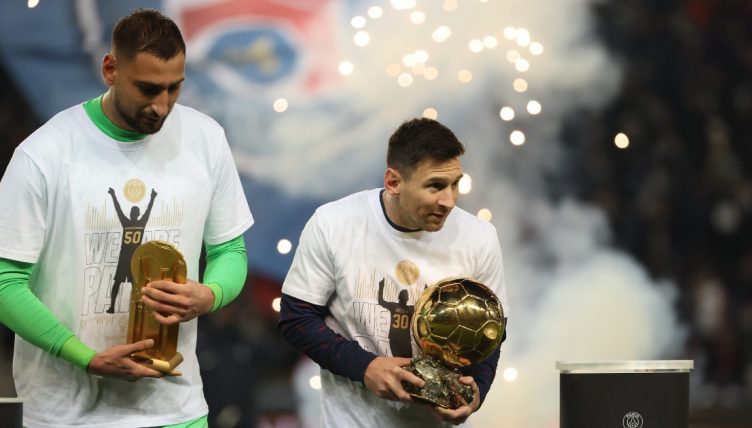 Lionel Messi showed off his seventh Ballon d’Or ahead of PSG’s clash with Nice on Wednesday evening.

The Barcelona legend already boasted the record for the most prestigious individual award in football and extended that lead on Monday in a glitzy ceremony in Paris.

Messi edged out Bayern Munich striker Robert Lewandowski to win his seventh, largely for his talismanic contribution to Argentina’s Copa America victory in the summer, after what’s been a difficult year at club level.

The 34-year-old won the Copa del Rey last season, but a dysfunctional and underperforming Barcelona finished a distant third in La Liga before his shock move to PSG in the summer. It’s been a comparatively slow start at PSG, with just one league goal so far – although he did notch a hat-trick of assists against Saint-Etienne on Sunday.

Two nights after receiving the award in the French capital, Messi was back to his day job at the Parc des Princes, lining up for the Ligue 1 leaders as they hosted Nice.

Before kick-off, the Argentinian and Gianluigi Donnarumma, who won the Yashin award for best goalkeeper, paraded their trophies – before being a little caught out by an extravagant firework display.

Not sure if he was ready for the fireworks 😅 pic.twitter.com/f71wNJjVf6