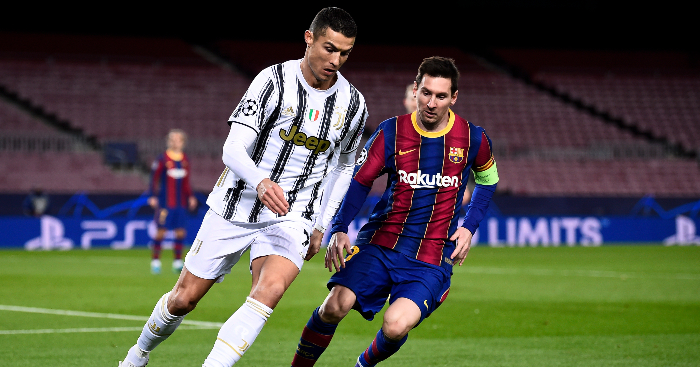 All eyes were on Lionel Messi and Cristiano Ronaldo last night as Barcelona took on Juventus at the Camp Nou.

The two outstanding individuals of the modern era have won nine Champions Leagues between them, but this was the first time they faced off in the competition since Barcelona beat Jose Mourinho’s Real Madrid in the 2011 semi-finals.

And it was Ronaldo who came out on top on the night, scoring two penalties as the Old Lady pipped Barcelona to the top spot in the group by registering a 3-0 win at the Camp Nou. The pressure is mounting on Ronald Koeman after the club’s 38-game unbeaten streak on home soil in Europe came to a crashing end.

Messi, meanwhile, put in a lively performance but it just wasn’t his night. He registered seven shots on target, and 11 in total, but couldn’t find a way past Gianluigi Buffon, who rolled back the years with an excellent performance at the age of 42.

This clip is a good illustration of both of their nights. Messi did well to nutmeg Leonardo Bonucci before bursting into the box, but Ronaldo was on hand to make sure he didn’t get onto the end of it, darting in and sweeping up to clear.

If ever a clip sums up the contrasting emotions of Lionel Messi's and Cristiano Ronaldo's night, this is it… pic.twitter.com/HrtJawccLA