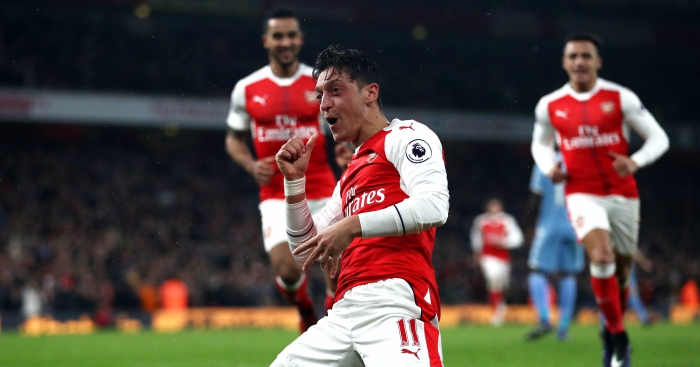 It may have been Alexis Sanchez’s goals that gave Arsenal victory over Crystal Palace, but Mesut Ozil entertained us all with a brilliant piece of unexpected skill.

Sanchez’s five-minute brace in the second half took his side into an unassailable lead at Selhurst Park, as Arsenal scraped through a close-fought game.

However, in our eyes anyway, the real entertainment came just before kick-off, as the players were leaving the pitch following their warm-up.

Ozil was captured on Arsenal’s Snapchat story dribbling a ball as he and Danny Welbeck made their way back to the changing rooms.

Welbeck is visibly trying to avoid being nutmegged by the German, as the pair joke while leaving the field.

But, just before time is up and they reach the tunnel, Ozil brilliantly knocks the ball onto the pitchside advertising board, and somehow finds the smallest of gaps in between Welbeck’s legs.

See the piece of brilliance for yourself in the video below.

Welbeck tried to avoid being nutmegged by Mesut Özil, so he used the advertising board instead. pic.twitter.com/mq9EnVQNcI

Where are they now: Arsenal’s League Cup youngsters since 2007