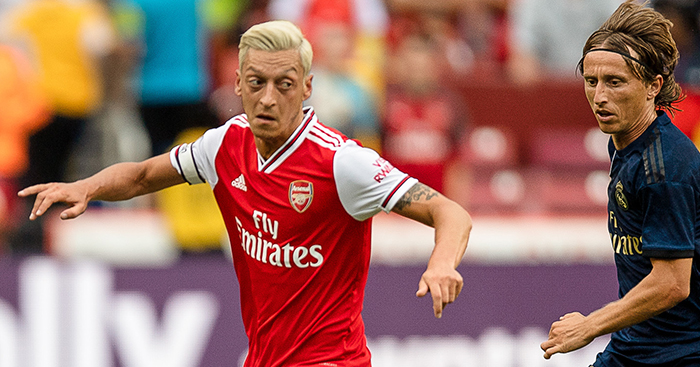 Mesut Ozil faced Real Madrid for the first time since leaving for Arsenal in 2013 – and made sure he caught the eye on a night of high drama in Washington.

Arsenal took the lead through Alexandre Lacazette’s penalty after 10 minutes, awarded for a handball which saw Nacho sent off, and the Frenchmen then turned provider to set up Pierre-Emerick Aubameyang to make it 2-0.

However, Sokratis was sent off for two bookings in quick succession just before half-time to level up the game in terms of personnel, and goals from Gareth Bale – a surprise inclusion – and Marco Asensio levelled it up on the scoresheet too.

Real went on to win a shootout 3-2, but despite all of that action, it was a touch from Ozil four minutes before the break which had us purring.

He was a somewhat unlikely target for Emiliano Martínez’s long punt out of his hands, especially with Raphael Varane for company, but Ozil somehow managed to not only hold off the Real defender but also bring the ball down with a single touch on the half-turn and then accelerate away towards goal.