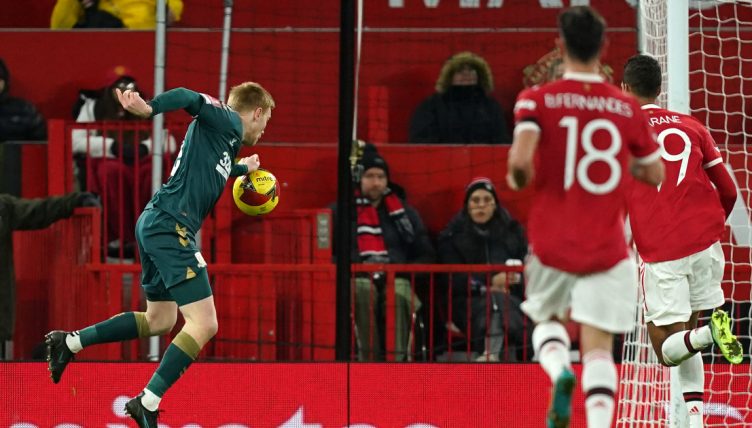 Manchester United’s shock FA Cup defeat at home to Championship side Middlesbrough was a very tough one to take. Cristiano Ronaldo missed a penalty and the team missed glorious chances before the visitors equalised and took the game to penalties.

United fans will have left the ground seething, not least because of the manner in which Boro equalised.

Isaiah Jones floated the ball into the box from the right, which was picked up by Duncan Watmore inside the box. His touch saw the ball fly onto his hand, but he duly chipped the ball over to Matt Crooks, who finished to cause mayhem amongst the visiting fans.

A VAR check took place after the goal, but to the surprise of many, allowed the goal to stand despite what appeared to be a clear handball by Watmore.

To rub salt in the wounds of the United fans, the goalscorer Crooks and assister Watmore both came through the Man United academy.

People might remember Watmore from Sam Allardyce’s Sunderland side from 2015-16, and United struggled to deal with the winger from the moment he came on for Folarin Balogun in the second half.

Speaking to ITV Sport after the game, the 27-year-old claims he thought the goal was correctly given.

“I mean, if I am honest, it (the handball) was completely accidental,” he stated. “I know it obviously touched my hand, but it was not intended at all.

“I was hoping it wouldn’t be (disallowed), and wasn’t expecting it, but obviously I’ll have to see it back, but it didn’t feel like it at the time.

“It was amazing to make a difference and to set up Croosky. We were in the United age group together here, so it is quite special for both of us. The fact he scored was even more special.”

It was a controversial goal, but not a single Middlesbrough fan even remotely cares.