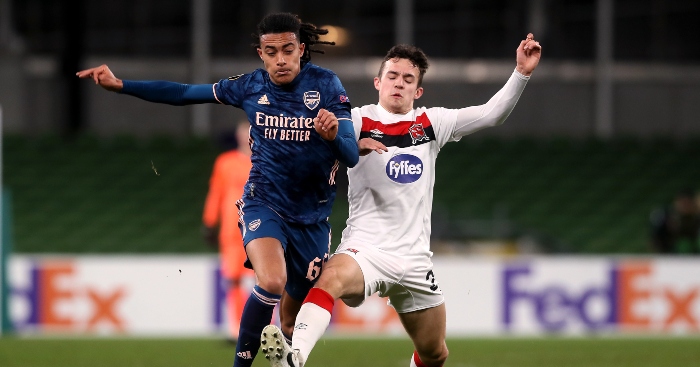 Miguel Azeez was handed his Arsenal debut in the closing stages of their 4-2 win over Dundalk and made a brilliant first impression.

Azeez, who has been on the Gunners’ books since the age of just five-years-old, is regarded as one of the brightest prospects emerging from the club’s academy.

Having already secured qualification to the Europa League round of 32, Mikel Arteta made several changes to their starting Xl for the final group game.

Azeez replaced Willock in the 83rd minute and looked full of confidence during his brief cameo, evading pressure with a brilliant turn in the middle of the park.

“I’m buzzing,” Azeez told Arsenal’s official website after the game. “I’m happy and overjoyed with the experience. I’m so grateful that I was able to get the experience and all the hard work has paid off today.”

Where are they now? Arsenal’s youngest ever Champions League side