Watch: Mike Ashley appears to swear at Newcastle fans after meal with squad 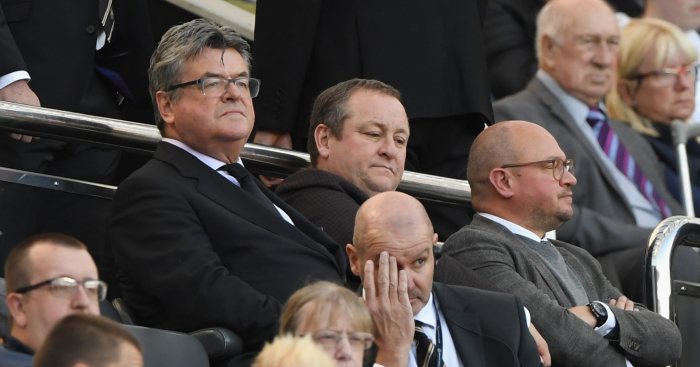 Mike Ashley and Newcastle United supporters already have a toxic relationship – and that will only worsen after footage emerged of the Magpies’ owner appearing to swear at fans.

With Newcastle struggling in the Premier League and still searching for their first victory, Ashley held a clear-the-air meal with Rafa Benitez and members of his squad amid growing tensions around the whole club.

Protesting fans chanted “where’s the money gone?” as Ashley entered the restaurant and the 54-year-old had to be escorted back to his car on the way out.

The chants continued, with footage appearing to show Ashley sticking two fingers up at fans from the back of the car.

However, a spokesperson for Ashley denied he swore at supporters: “Mike did not give a V sign to fans. It is obvious from the accompanying photos that he is smiling and enjoying the evening.

“Anybody who saw Match of the Day at the weekend will also be aware that Mike is actually very respectful in his reactions to fans.”

If anyone, anywhere, ever thinks Ashley is good for our club then just look at this.

The question – where’s the money gone?

The answer – two fingers to the fans. #NUFC pic.twitter.com/g9jBikSwmu

What Makes A Club: 21 photos to show the special St James’ experience