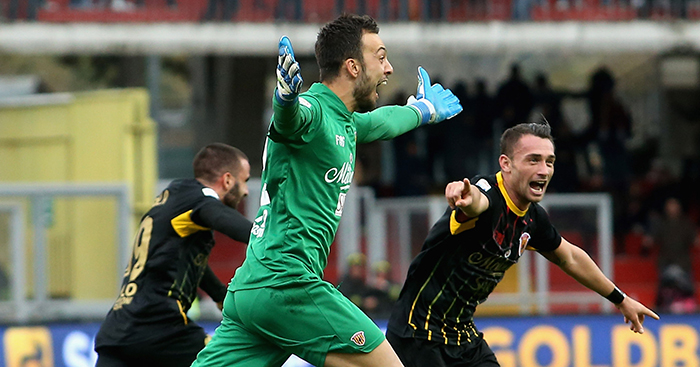 Benevento claimed their first point of the Serie A season in incredible fashion against AC Milan, with goalkeeper Alberto Brignoli scoring a stoppage-time equaliser.

Benevento had lost all 14 of their league games going into Sunday’s clash at Stadio Ciro Vigorito, scoring only six goals, and the run looked set to continue against Milan in Gennaro Gattuso’s first game in charge.

The Serie A minnows, playing in the top flight for the first time in their history, had earlier drawn level through George Puscas after Giacomo Bonaventura’s opener, but Milan regained the lead courtesy of Nikola Kalinic and seemed to have held on for the three points despite having Alessio Romagnoli sent off in the 75th minute.

However, heading into the final of five minutes of stoppage time, Benevento won a free-kick out on the left and sent up Brignoli. Incredibly, he rose highest to flick a header beyond everyone and into the far corner, sparking understandable scenes of jubilation – and disbelief.

Unsurprisingly, Gattuso was far from happy at conceding in such fashion, so late in the game, against the whipping boys of the league. And, again unsurprisingly, he did not do a great job at hiding his feelings.

Gennaro Gattuso's reaction says it all…