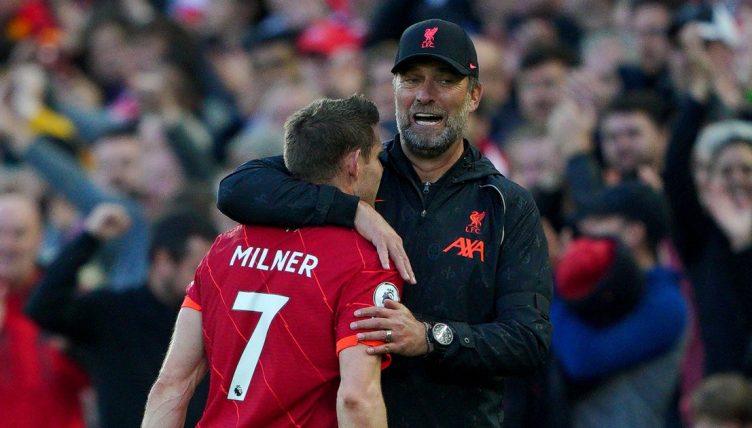 Mohamed Salah scored one of the goals of the season as Liverpool drew 2-2 at home to Manchester City, but the complexion of the game might have been completely different had James Milner been sent off moments earlier.

Milner was in at right-back for the injured Trent Alexander-Arnold, and the 35-year-old had a difficult afternoon’s work up against Phil Foden.

Foden drew a desperate foul from the veteran utility man shortly before the half-time whistle. Milner was then lucky to remain on the pitch deep into the second half after cynically tripping Bernardo Silva.

Referee Paul Tierney blew his whistle to give a foul against Milner, but he controversially deemed it not worthy of a second yellow – resulting in cries on social media from City fans while Pep Guardiola went spare on the touchline.

Moments later, Salah scored one of the goals of the season to make it 2-1 to Liverpool – and Jurgen Klopp knew that Milner had pushed his luck enough, taking him off and bringing on Joe Gomez in his place.

Kevin De Bruyne equalised a short while later, and it finished 2-2 in the end. But City might well feel they could or would’ve won it if Milner had been dismissed.

Ref playing favorites with Milner cause he has a yellow already pic.twitter.com/Y9nR5sE2ED