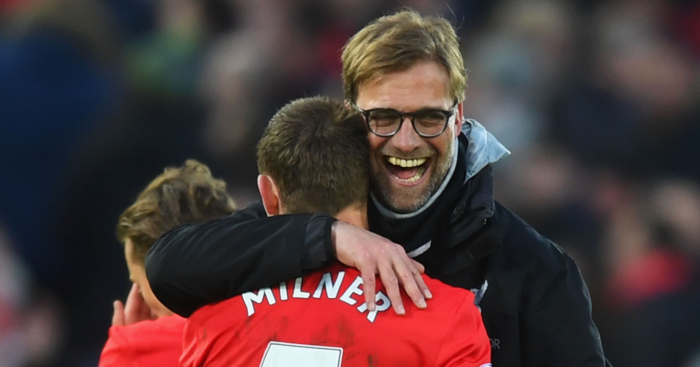 Liverpool players not involved at the World Cup have returned to training, though one man put them to shame in Jurgen Klopp’s fitness challenge.

Klopp knew from the off that the likes of Naby Keita and Virgil Van Dijk would be no match at all for James Milner, who was the last man standing in a lactate threshold test.

The test involved running laps around the club’s Melwood training base at a set speed, with Milner the only player remaining after completing each level of the test.

The 32-year-old’s achievement earned plenty of praise on social media.

Milner and countryman Adam Lallana were the two players who made it the furthest, with new signing Keita dropping out on a level before the pair.

The former England international then proceeded to complete the final round of the test alone, racing around the pitches at 24kmh.

Here’s the machine, ending Lallana’s challenge and then requesting players move out the way as he’s about to do the next level by himself. What a hero. pic.twitter.com/qJ6KIVPECC

Milner is often known for his work-rate and stamina, coupled with his ability to play in a number of positions which cut him a popular figure among fans and team-mates.

And his manager had faith in him all along, with Klopp successfully predicting the winner as the players initially set off.

The gaffer knew it all along pic.twitter.com/zcLpaFFd5B