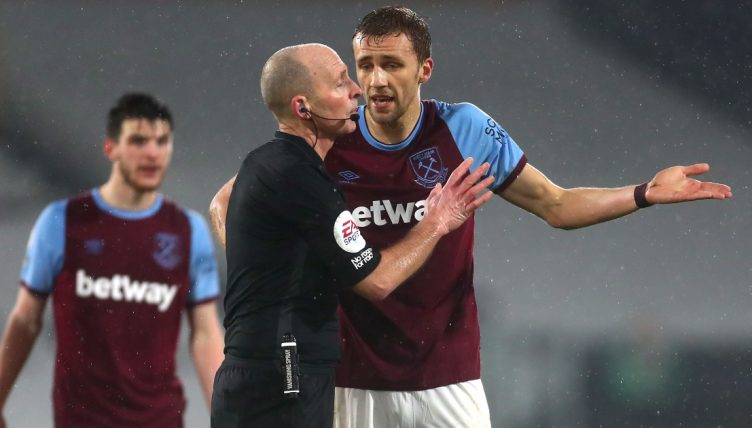 Not for the first time in his long career as a Premier League referee, Mike Dean was the centre of attention in West Ham‘s 0-0 draw at Fulham.

The tight contest was low on talking points, with the biggest emerging in injury time when Tomas Soucek was shown a straight red card for a supposed elbow on Aleksandar Mitrovic.

Dean appeared to be looking at the incident when it happened in real-time and didn’t take action before VAR official Lee Mason advised him to take a second look at the pitchside monitor.

After seeing the incident replayed in slow-motion several times, the referee returned to the pitch and dismissed Soucek, in spite of Mitrovic appearing to protest against the decision.

The Fulham striker went down dramatically – to put it lightly – having been lightly brushed by the elbow of Soucek, in what looked to be an innocent accident.

However, in spite of going down, Mitrovic appeared to protest the West Ham midfielder’s innocence as Dean was beckoned over to the monitor, as Mark Noble pleaded with Dean to listen to the Serbia international.

It evidently fell on deaf ears – which left the commentators, pundits, and seemingly everyone watching from home completely perplexed.

Can’t find a soul on here that thinks that’s a red card. How can both Lee Mason and Mike Dean both see it as a red? Tomas Soucek must get that overturned.

All about Mike Dean. Just how he likes it! 😡