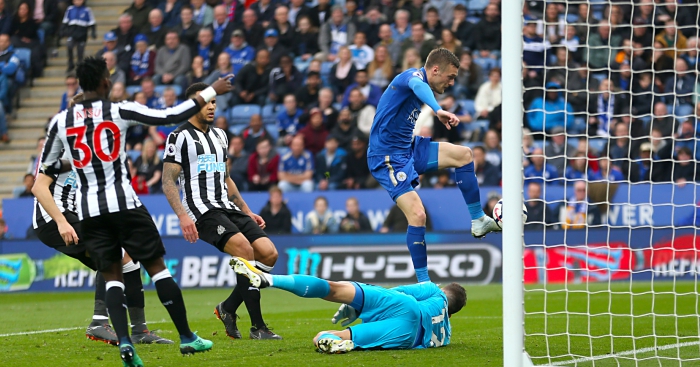 Jamie Vardy made us all wince as he felt the full force of Mo Diame’s right foot in a rather delicate area during Leicester City’s 2-1 defeat to Newcastle on Saturday.

Vardy’s afternoon was already disappointing enough. Leicester are aiming to pip Burnley to seventh place to secure a place in next season’s Europa League, but it was Rafa Benitez’s Newcastle, who are battling against relegation, who came away with all three points at the King Power Stadium.

Jonjo Shelvey gave the visitors the lead with a smart finish from the edge of the box before Ayoze Perez doubled their advantage in the second half.

Vardy did pull a goal back late on, but he was still smarting from a first-half challenge by Diame.

The game was notable for a number of challenges, with Newcastle winning seven good ol’ fashioned 50-50s in the space of 20 seconds.

Watch: Newcastle players fly into 7 big tackles in the space of 20 seconds