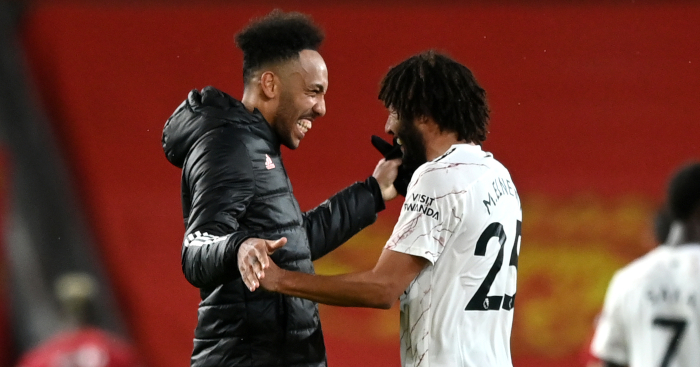 The resurgence of Mo Elneny at Arsenal has been one of the more unexpected storylines of 2020-21 to date.

Rarely a regular in the starting XI since joining Arsenal four years ago, Elneny was shipped off on loan to Besiktas by Unai Emery last season and was largely tipped to leave the Gunners permanently this summer.

But Mikel Arteta, who replaced Emery last December, has been more than happy to make use of the Egypt international since the midfielder returned to north London.

Elneny made his fourth Premier League start of the campaign on Sunday and shone next to underrated nutmeg merchant Thomas Partey in central midfield.

The highlight of the 28-year-old’s game came in the 91st minute, when he showed an incredible engine to lead the press and force Victor Lindelof into a mistake.

Lindelof threw his hands into the air in anger at his team-mates after kicking the ball out of play, but this sums up exactly why Arteta has taken a shine to Elneny.