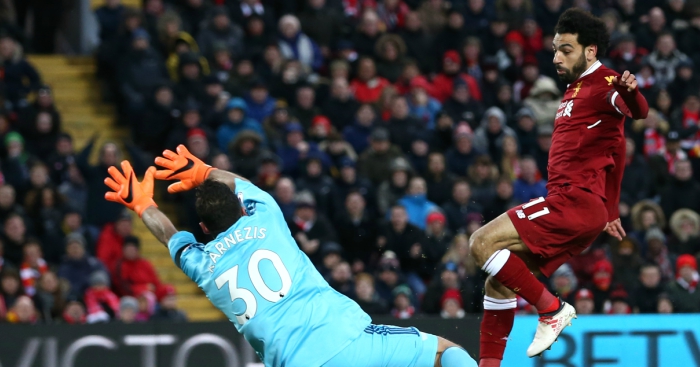 Watford were the latest victims to be tormented by Mo Salah, but at least the Liverpool forward had the good grace to apologise.

Salah took his tally to 36 in all competitions for Liverpool this season with four goals in the Reds’ 5-0 victory over Watford at Anfield.

Roberto Firmino also struck for the hosts, but there was only one name on everybody’s lips after yet another outstanding performance from the Egyptian.

Salah is now the top goalscorer in Europe’s top five leagues, above even Lionel Messi, and Jurgen Klopp suggested after the game that the Liverpool forward is “on his way” to being mentioned in the same bracket as the Barcelona superstar.

Amid all his goalscoring exploits, we should probably spare a thought for the goalkeepers who have had to face the forward when he is in such devastating form.

Watford’s Orestis Karnezis was the unlucky one this weekend, and Salah even took the time to apologise to the Greece international.