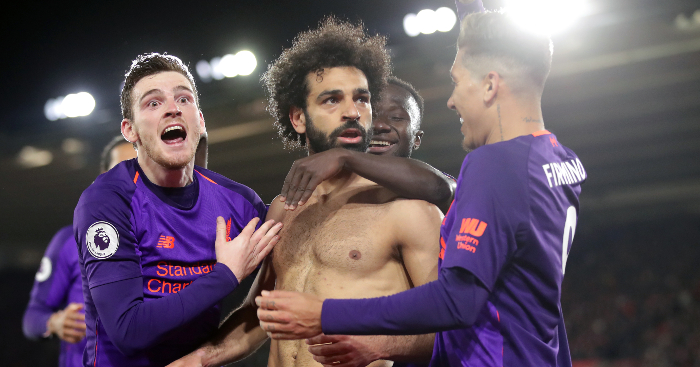 Mo Salah clearly enjoyed ending his goal drought as he scored to put Liverpool ahead against Southampton, ten minutes before full-time.

The Egyptian had broken free from his own half into a one-on-one situation and looked like he might have delayed his strike too long when he placed the ball into the corner to score his 50th Premier League goal for the Reds.

He’d gone nine games without scoring, and there was clearly relief as he whipped off his shirt to celebrate. Andy Robertson goes in to embrace him but Salah ducks out of the way to send him into the arms of Jordan Henderson.

It wasn’t the only memorable celebration of the game. Earlier on, Naby Keita scored his first goal for Liverpool to equalise and had Sadio Mane ready and waiting to offer him a piggyback.