Watch: Mo Salah tries to pass to Joel Matip despite replacing him as sub 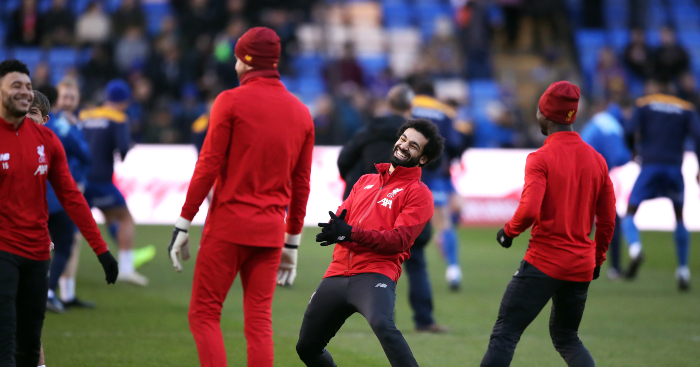 Liverpool‘s second half against Shrewsbury Town was summed up by the sight of Mo Salah trying to pass the ball to Joel Matip – despite having just replaced the defender as a substitute.

Jurgen Klopp’s side appeared to be cruising to victory at New Meadow after Curtis Jones’ first-half opener was followed by Donald Love’s own goal shortly after half-time.

But Shrewsbury fought back to stun the Premier League leaders and force a replay thanks to two goals from substitute Jason Cummings.

The striker came on with half an hour to remaining and converted a penalty five minutes later before bagging the equaliser with 15 minutes left to play.

Klopp sent on Salah in place of Matip after Cummings’ second, and shortly afterwards the forward tried to pick out a team-mate on the right flank, only for it to turn out to be Matip walking towards the dugout.

Mo salah passing to Matip the player that replaced him 😂😂😂 pic.twitter.com/tA0QdDKbKc