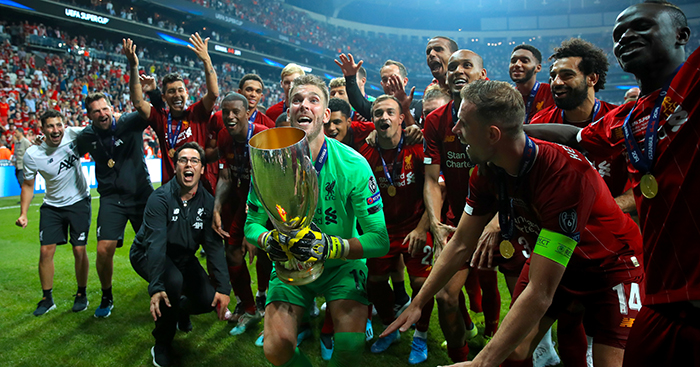 Adrian could miss Liverpool‘s Premier League game against Southampton after a fan who ran onto the pitch after the UEFA Super Cup win over Chelsea injured the goalkeeper’s ankle.

Adrian was the Reds’ hero on the night, making the decisive save from Tammy Abraham in the shootout following a 2-2 draw, but his joy was very quickly tempered.

As his team-mates rushed to congratulate him and celebrate the victory, so too did a fan. But, being chased by security guards, the fan slipped just as he approached the huddle of Liverpool players and went crashing into them, with several toppling over.

As you can see from the footage below, Adrian immediately appeared hurt, and although he was front and centre during the official celebrations shortly afterwards, Jurgen Klopp revealed in his press conference on Friday that the Spaniard’s ankle is still swollen, making him a doubt for Saturday’s game at St Mary’s.

Speaking about the pitch invader, Klopp said: “I don’t know what you can do about it in the stadium, but that means there is a lot of responsibility for the supporters as well.

“If the one person cannot hesitate or stop himself, then the people around should do it because it’s not funny. It’s crazy. You think ‘wow, how can something like this happen?'”

Did anyone see this slide tackle by some idiot after the shoot out… what the heck man!! #LFC #SuperCup pic.twitter.com/hJrGpiguMd