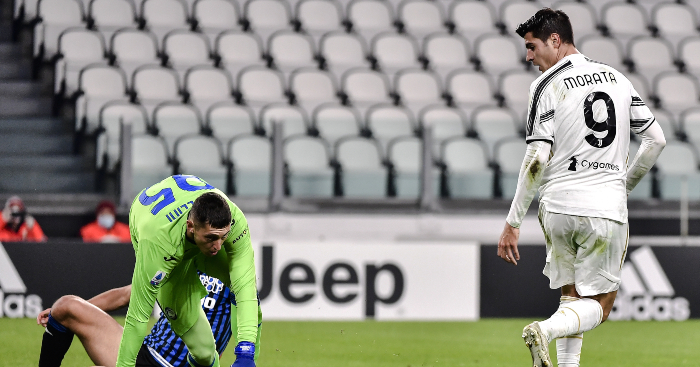 Alvaro Morata is no stranger to an embarrassing miss, but the former Chelsea striker truly outdid himself in Juventus’ 1-1 draw with Atalanta on Wednesday.

We had to feel for Morata when he saw a hat-trick of goals all disallowed for offside in one game earlier this season, so we can only admire how he continues to put himself in the firing line.

The striker has actually been in decent form for Juve this season, scoring nine times in all competitions to date in 2020-21.

But he will want to forget what was in fact a double miss against Atalanta. The Spain international first failed to make the most of a two-on-one with the goalkeeper before the ball ricocheted back into his path with his back to an open goal.

The initial miss clearly didn’t knock Morata’s confidence, as he then tried to backheel the ball into the back of the net. Sadly, he missed the ball.

Thankfully the offside flag spared him some of the embarrassment, but on a night when Dejan Lovren calmly chested the ball over his own goalkeeper, we can only assume the stars must have been aligned.

Alvaro Morata must have been relieved to see the flag go up after this! 😥