Watch: Mourinho fumes at ref, gets sent off, gives sarcastic thumbs up 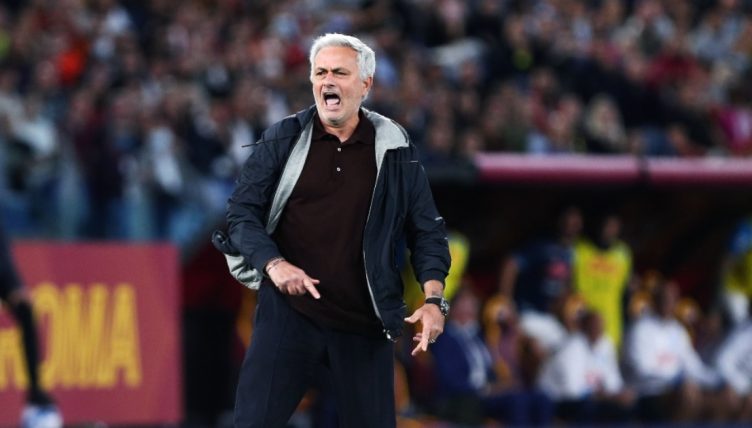 A bad week got worse for Roma manager Jose Mourinho when he was shown a red card in a 0-0 draw with top of the table Napoli.

The Portuguese manager was shown two yellow cards before being sent to the stands for his theatrical antics on the touchline due to his frustration with the referee’s decisions throughout the game.

The incident capped off a poor week for the Roma boss after his side were embarrassed in a 6-1 away loss to Norwegian side FK Bodo/Glimt in the Europa Conference League.

Mourinho was extremely frustrated when what he perceived to be a foul on Zaniolo was not given in the 80th minute of the match with Napoli, with the score deadlocked at 0-0.

He ran around in frustration and lashed out with a kick when the decision did not go Roma’s way at the Stadio Olimpico.

Already on a yellow card for a similar incident earlier on in the game, the referee awarded a second yellow followed by a red card to Mourinho after the next breakdown in play.

Mourinho then gave the referee a sarcastic thumbs up before being ushered away.

It’s not the first time he’s been in trouble on the touchline, with similar incidents occurring during his tenures with Chelsea, Manchester United and Tottenham.

Just have a look at José Mourinho 👀😂

A sarcastic thumbs up to the referee for good measure 👍