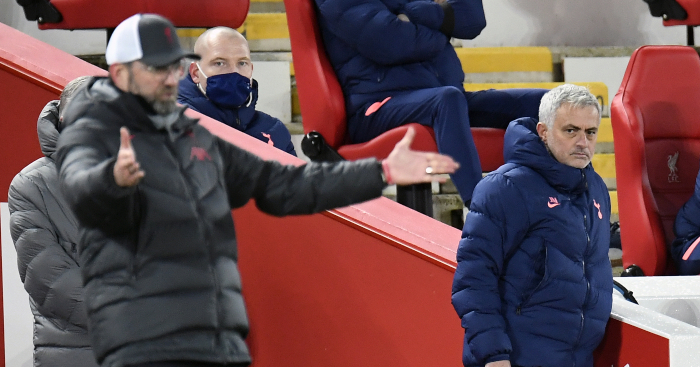 Both clubs have set the pace in the Premier League at the start of the 2020-21 season, wtih Liverpool leapfrogging Spurs into first place courtesy of their victory.

The hosts dominated the first half but were left to rue a number of missed chances at half-time as Son Heung-min cancelled out Mo Salah’s opener.

Both sides squandered further opportunities before Roberto Firmino headed home a stoppage-time winner to seal a significant win for the Reds.

Manager Klopp was typically emotive on the touchline throughout, and Mourinho appeared unimpressed with his opposite number at full-time, although the Liverpool boss seemed to try to laugh things off.

“I told him the best team lost, but he disagreed,” Mourinho told Amazon Prime afterwards before complaining that he would be treated differently if he was as animated on the touchline.

Words between Jurgen Klopp and Jose Mourinho at full-time 👀

"I told him the best team lost…"

"He disagreed, but that's his opinion!"

Jose Mourinho's post-match thoughts, including his view of the conversation with Jurgen Klopp at full-time…#PLonPrime #LIVTOT pic.twitter.com/L9Lu2N6tMS