Watch: Nabil Fekir sent off for being tackled then punches VAR screen 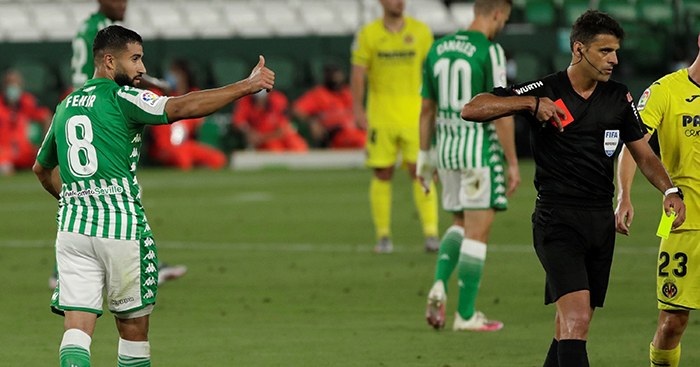 Nabil Fekir was quite literally sent off for being tackled in Real Betis’ defeat to Villarreal on Wednesday night – but that still doesn’t explain why he punched the VAR screen on his walk to the tunnel.

Gerard Moreno had already put Villarreal two goals to the good at the Benito Villamarín Stadium when Fekir all but ended Betis’ hopes of a second-half comeback by getting booked twice in the space of two minutes.

But while most players would get a half-time rollocking from their manager for such stupidy, Fekir could quite justifiably claim to have been completely blameless for his second yellow card, which saw him tackled by Raul Albiol and – no matter how many times we watch it – seemingly do nothing wrong whatsoever.

A cynic might suggest it may have had something to do with him throwing the ball at referee Jesus Gil Manzano to earn his first booking, and Fekir responded with a sarcastic thumbs up after being given his marching orders.

That makes perfect sense, but what we can’t quite understand is why the Frenchman then proceeded to punch the VAR screen as he left the pitch.

Watch the two clips below of his second booking and then his angry reaction.