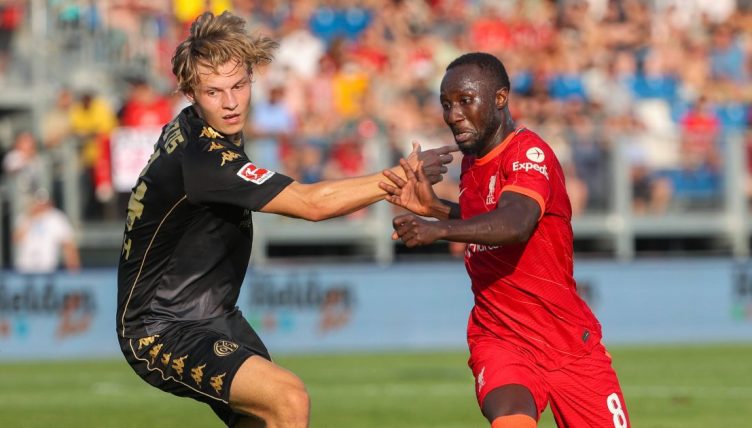 Naby Keita gave Liverpool fans a timely reminder of his abilities with two cheeky nutmegs during their 1-0 pre-season win over Mainz.

Since joining Liverpool from Bundesliga side RB Leipzig in a £48million deal in 2018, Keita has struggled to live up to expectations.

The midfielder has been hampered by a series of injury problems, making just 28 Premier League appearances over the last two seasons.

With Thiago Alcantara, Jordan Henderson and Fabinho yet to link up with the Liverpool squad, the likes of Keita, Curtis Jones and Alex Oxlade-Chamberlain all have a chance to stake their first-team claim this summer.

“A lot of midfielders [are] not here, so come on, take the chance and play the best football you are able to do and then we immediately get options,” Jurgen Klopp told Liverpool’s official website ahead of pre-season.

Keita grabbed his opportunity with both hands against Mainz, skipping past two players before nutmegging a third and winning a free-kick.

The Guinea international continued to put on a show, winning another free-kick after a cheeky nutmeg in the middle of the park.

Liverpool won the game following a late Luca Kilian own goal and will play Hertha Berlin in their next pre-season friendly.

Why are Liverpool fans excited to watch Naby Keita this season?