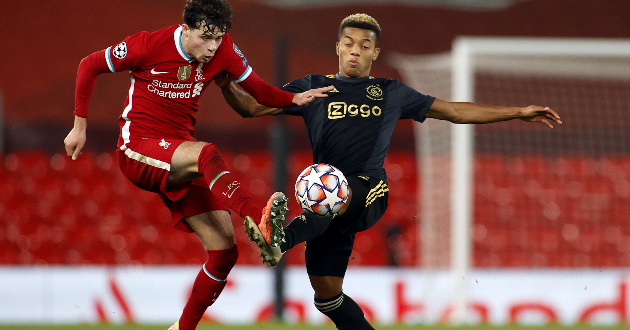 Neco Williams has not had the easiest run with Liverpool this season, but he produced a moment of pure brilliance on Tuesday night against Ajax in the Champions League.

Thrust into a makeshift back four following a mass of injuries, Williams has at times struggled amid criticism of his displays on social media, most recently giving away a penalty against Brighton on Saturday.

In last night’s 1-0 win against the Dutch giants, however, he stepped it up a gear.

Sure, the 19-year-old provided an excellent assist for Curtis Jones’ winner with a lovely deep cross that completely fooled Andre Onana, but his most impressive moment was more subtle.

With a looping Ajax clearance sent high into the Liverpool sky, many right-backs may have panicked, especially with a player of Nicolas Tagliafico’s class hovering nearby.

Instead, Williams simply plucked the ball out of the sky, launched another attack for the hosts and sat the Argentinian on the Anfield turf in the process.