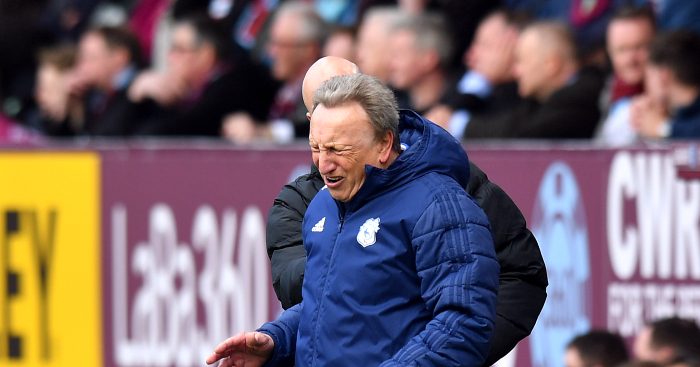 Neil Warnock was left fuming with the officials again on Saturday after seeing a penalty for Cardiff given, and then overturned, against Burnley.

It’s not the first time that the veteran manager has been left angry with decisions recently, with this latest incident coming just a fortnight after his staredown with the match officials following the 2-1 defeat to Chelsea.

Cardiff really needed to win the relegation crunch match with Burnley in their bid for survival, and 1-0 down, they thought they had a chance to get back into it when Mike Dean pointed to the penalty spot. But after much deliberation with his assistants, Dean subsequently overturned the decision.

And that wasn’t the game’s only flashpoint. Earlier, when Ashley Barnes was brought down by Joe Bennett, he instigated the classic head-to-head coming together only to then kiss the Cardiff man not once but twice.

Watch the two incidents below:

Neil Etheridge: I nearly blew my career after Fulham and had to sell my house