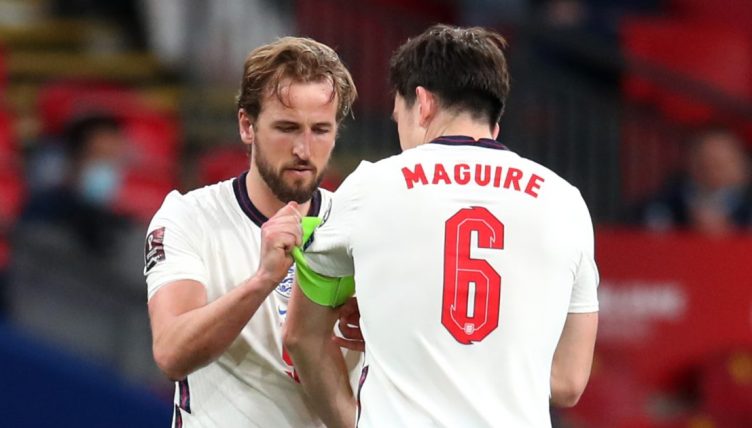 Gary Neville stunned Jamie Carragher on Monday Night Football by claiming that Harry Maguire would be a bigger loss to England than Harry Kane if either were to miss Euro 2020.

Despite Tottenham’s struggles, Kane has been in incredible form this season, registering 19 goals and 13 assists in 28 Premier League appearances.

Maguire, meanwhile, has divided opinion since making his £80million move to Manchester United in 2019.

While Neville admits that Kane is England’s best player, he feels that their lack of depth at centre-back means that losing Maguire to an injury would be Gareth Southgate’s biggest worry.

“You always have to think if one player gets injured where do I then go to,” Neville said on Sky Sports. “If Harry Kane gets injured you could go with Marcus Rashford, Dominic Calvert-Lewin, Raheem Sterling as a false forward or Phil Foden.

“There are options England can still win games. But with Maguire, the ability to go to a back four is lost and that’s why he’s got a three in the back of his mind.”

Judging by his facial expression, it’s safe to say Carragher didn’t quite agree with Neville’s claim.

Would Harry Maguire be a bigger miss for England than Harry Kane? 🏴󠁧󠁢󠁥󠁮󠁧󠁿@GNev2 and @Carra23 don't agree again… 😂 pic.twitter.com/D2kpkeGnBS