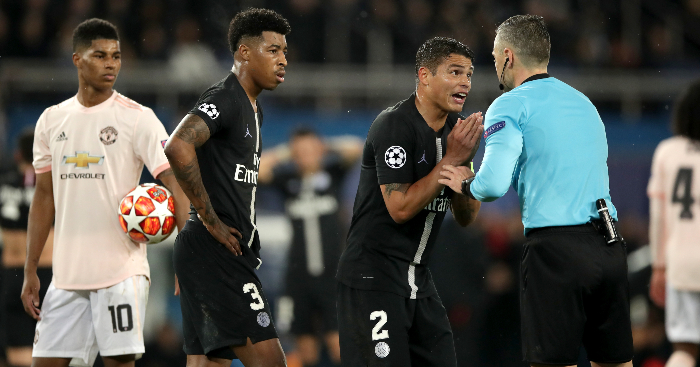 Manchester United have an absolutely massive Champions League match against RB Leipzig tonight. To get you in the mood, why not relive one of the club’s finest moments of recent years?

New footage has emerged giving extra insight into the decision to award United their last-minute penalty away against PSG back in 2019.

Marcus Rashford, of course, stepped up to slot the penalty home and send Ole Gunnar Solskjaer’s men to the quarter-finals at the expense of the Ligue 1 champions after replays showed the ball striking the arm of Presnel Kimpembe.

The newly-released clip shows referee Damir Skomina under incredible pressure as he reviews the incident at the pitchside monitor, which is right next to the United dugout.

Solskjaer, Mike Phelan, Michael Carrick and Marcos Rojo can be seen keeping a close eye on what’s happening as players and staff are urged to step away from the match official while he communicates with the VAR team.