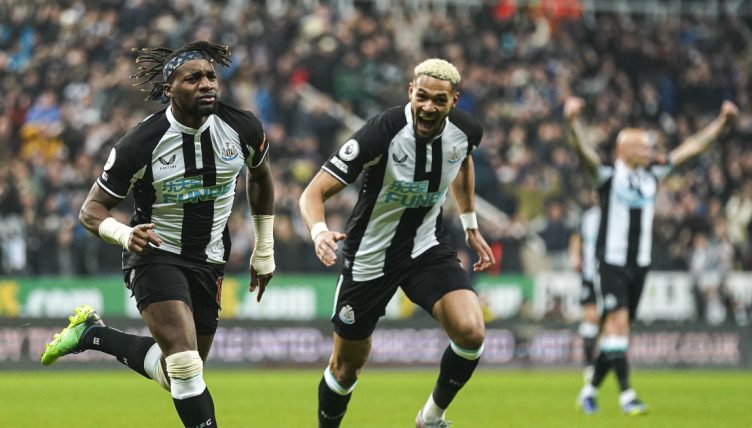 Newcastle United are finally starting to look like a decent football team – and Joelinton’s brilliant nutmeg on Marcus Rashford during the Magpies’ Premier League draw with Manchester United on Monday night was the ultimate proof they’ve turned a corner.

Allan Saint-Maximin and Joelinton were the game’s stand-out performers, as the Newcastle held the Red Devils 1-1.

One moment that demonstrated the class of both players came when Saint-Maximin found himself isolated on the far left of the pitch with Diogo Dalot.

The Frenchman dazzled the Portuguese full-back, producing a double stepover and dragging the ball back.

It was a sumptuous display of his talent, but it was perhaps surpassed by what his teammate Joelinton did next.

Saint-Maximin moved the ball onto the Brazilian who ran onto it, knocking it through the legs of Marcus Rashford who stepped back as if to greet the Newcastle attacker as he flew past.

You could almost see Rashford’s soul escaping into the Tyneside night sky as the big Brazilian sliced him apart with the delightful skill.

Capping off a beautiful move, Joelinton then gave the ball back to Saint-Maximin who had found space in the United area although he could not score from his shot.

It was a piece of play that demonstrated the two have the quality Eddie Howe must build around to give Newcastle a chance at survival this season.

Saint-Maximin had opened the scoring in just the seventh minute when he curled the ball past David de Gea.

He had a second gilt-edged opportunity to double the lead just after half time but De Gea was equal to it.

Edinson Cavani then scored in the 71st minute to earn United a hard-fought point.

Both Joelinton and Saint-Maximin have been the standout performers for Newcastle this season in a poor team.

They will hope the January transfer window will see players of similar quality come in to help keep the Magpies in the top flight.

Saint-Maximin with the double stepovers… Joelinton putting the megs on Rashford… yikes. it's saucy out here. #NUFC pic.twitter.com/9AE6H1LiWT

Where are they now? The Newcastle side that topped the PL at Xmas 2001