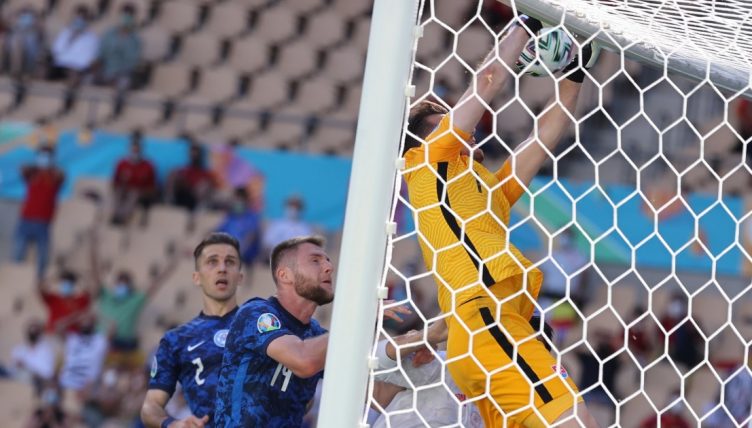 Newcastle United‘s Martin Dubravka went from hero to zero in the first half of Slovakia’s final Euro 2020 group stage match against Spain.

Having shocked Poland with a surprise 1-0 victory in their opener, Slovakia needed to take a point against Spain to make it through to the knockout stages.

It was a typically dominant performance from La Roja, in terms of possession and territory, but as in their opening draws against Sweden and Poland, looked their own worst enemy as they missed a raft of chances; none more glaring than a missed penalty from under-fire Alvaro Morata.

Juventus striker Morata has been profligate with his finishing throughout the tournament so far and saw his spot-kick saved by Dubravka in the opening stages.

Fortunately for Spain, they were then given a helping hand by the Newcastle goalkeeper, who scored one of the most ridiculous and bizarre own goals you’ll ever see.

PSG forward Pablo Sarabia struck the crossbar, and as the ball fell back down to earth, Dubravka appeared to lose his bearings – possibly due to the sun in his eyes? – before padding the ball into his own net. Oh, mate.

"As goalkeeping errors go, that is a 𝐡𝐨𝐰𝐥𝐞𝐫." 😳