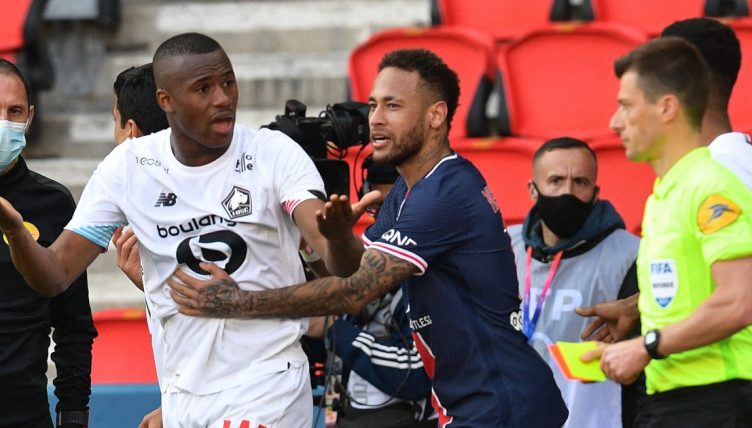 Neymar had to be restrained in the tunnel after being sent off in the closing stages of Paris Saint-Germain’s 1-0 defeat to Lille.

The two sides were level on points heading into their clash at the Parc des Princes but Jonathan David’s deflected effort gave Lille the lead after 20 minutes.

Neymar, making only his second appearance since returning from an injury lay-off, struggled to make a major impact and cut a frustrated figure.

The Brazil international shoved Lille’s Tiago Djalo to the floor in the 89th minute and was shown a second yellow card by the referee. He has now been sent off three times in Ligue 1 since the start of 2020, more than any other player in the competition.

Djalo was also sent off for a foul-mouthed rant and the pair were still angry with each other in the tunnel.

Neymar shoved Djalo and tried to confront the Lille defender again before being ushered into the home dressing room.

Neymar and Djalo have a fight in the tunnel during the PSG & Lille football match pic.twitter.com/Xptluo6BzP