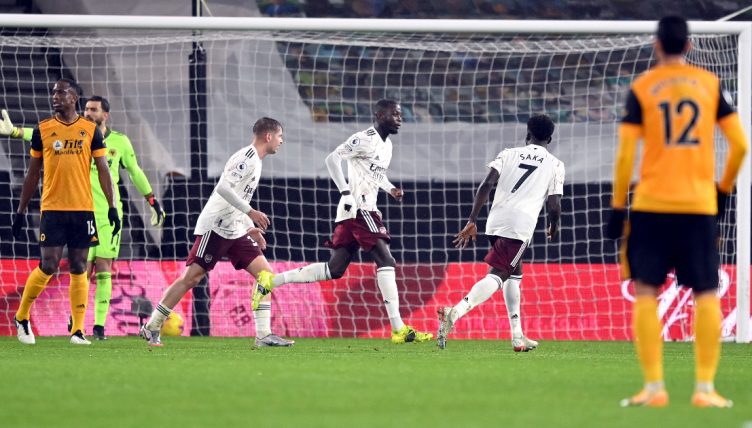 Every so often you see a goal so good that you have to go back, pause, and rewatch a couple of moments over and over. Nicolas Pepe scored one such goal to open the scoring for Arsenal against Wolves.

Deployed on the left side of the attack, the Gunners’ much-maligned record signing has put in some improved performances in recent weeks, with the best moment yet coming just after the half-hour mark at Molineux.

Picking up the ball out on the flank, he does brilliant to cut inside and go bursting into the box.

But to do so, he needed to skilfully take the ball past Nelson Semedo with a move so tricky it will have given the Wolves right-back flashbacks to his infamous horrorshow against Bayern Munich’s Alphonso Davies in the Champions League last season.

Semedo recovered to get back and put in a challenge, but the Ivorian attacker was strong enough to bundle him away, all the while keeping control of the ball, taking a deft touch to get it through Ruben Neves’ legs.

He then continued his one-man assault on the nation of Portugal to unleash a fierce, unstoppable shot across Rui Patricio and into the back of the net. Sensational.

Nicolas Pepe just would not be stopped 😤

Wins the ball back, beats his man, beats another, and finds the top corner for a great individual goal! pic.twitter.com/3BTrpWazS6