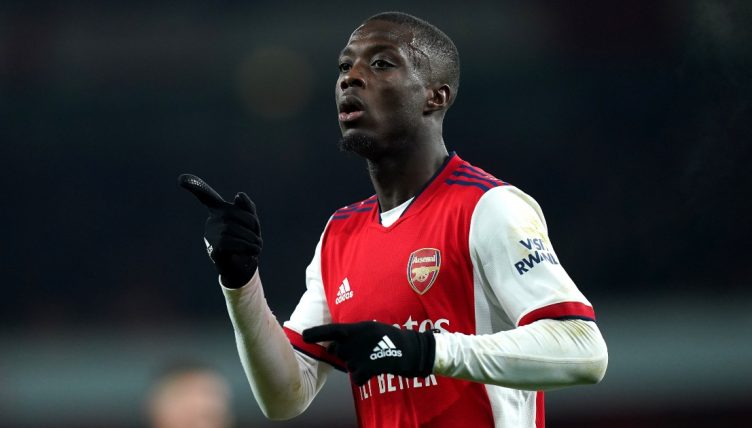 After returning from the Africa Cup of Nations, Arsenal winger Nicolas Pepe produced a timely reminder of his abilities in a recent training session.

Pepe, who joined Arsenal from Lille in a £72million deal in 2019, has failed to live up to expectations during his first two-and-half years at the Emirates.

The winger has now fallen below Bukayo Saka in the pecking order and finds himself on the fringes of Mikel Arteta’s side, starting just five Premier League games in 2021-22.

He appeared to rediscover his best form at the Africa Cup of Nations, scoring two goals in four games before Ivory Coast were knocked out by Egypt.

Despite being linked with Ligue 1 duo Marseille and Lyon in January, Pepe remained at Arsenal and could get another chance under Mikel Arteta following Pierre Emerick-Aubameyang’s departure.

“Up to this point he’s not used Pepe in any way that makes me think he’s got love for Pepe,” Ian Wright recently said on his Wrighty’s House podcast. ‘I think Pepe might be in the last chance saloon, with the amount of games he hasn’t played.

“I’d like to see something from him. When you watch him in the Africa Cup of Nations, where I think the defender is even harder with them guys, with how athletic, how good and how intelligent they are. You’ve got to do a lot more, and when you watch him, he’s done it! Why aren’t we getting that out of him?

Pepe is now back at Arsenal and looked full of confidence in a recent training session, curling the ball into the top corner from a tight angle.