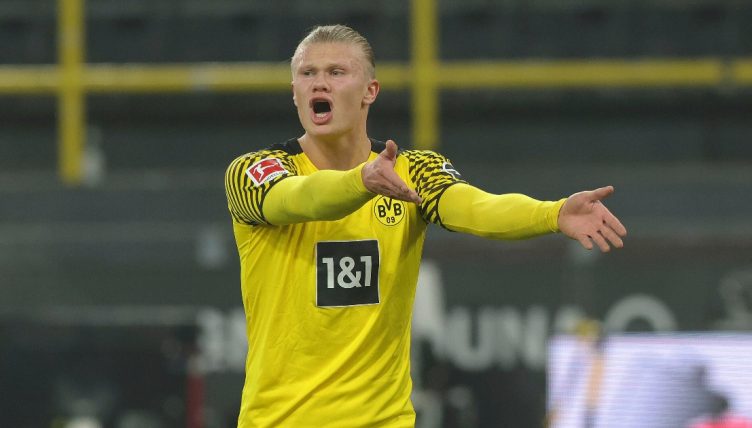 Plenty of ears will have pricked up in the boardrooms of Barcelona, Real Madrid and Manchester City last night as Erling Haaland gave an explosive interview that hinted at the possibility of a move this month.

Arguably the most in-demand player in world football, Haaland has suggested that his future will be away from Dortmund.

The 21-year-old Norwegian has previously remained tight-lipped on transfer speculation, with a number of Europe’s elite clubs constantly tipped to land his signature.

With Dortmund out of the Champions League at the group stage, Haaland could yet remain in the competition if he jumps ship this month.

He gave the quotes after scoring twice in Dortmund’s 5-1 victory over Freiburg on Friday night, linking up well with England’s Jude Bellingham for the third goal, taking his tally to 15 league goals this season and helping Dortmund move within three points of league leaders Bayern Munich.

“The last six months I have chosen not to say anything out of respect for Dortmund, but now the club has started to press me into making a decision,” Haaland told fellow Norwegian Jan Age Fjortoft.

“All I want to do is play football. But they press me … about my future, so that means I have to make a decision soon.”

“That is what they [Dortmund] want,” he responded when asked if he was to decide his destination imminently.

“It means things will happen now. They have started to put a lot of pressure on me, and I have to accept that … so now is the time to get things started.

Haaland added that he wants to delay his decision “because we are in the middle of a difficult period, with a lot of games. I have said from the beginning that I want to focus on football, because that is when I am at my best. But I can’t do that now.”

Many media outlets have suggested that the Norway international has a €75million release clause that kicks in this summer, but he could go for considerably more were he to move this January.

Real Madrid are said to want both him and Kylian Mbappe, out of contract at PSG this summer, while Manchester City have consistently been linked during their pursuit of a new centre-forward, remaining in the market after missing out on Harry Kane in the last transfer window.

Cash-strapped Barcelona, meanwhile, aren’t yet out of the race – somehow – after club president Joan Laporta teased the club “are back” in the market for the world’s best players.