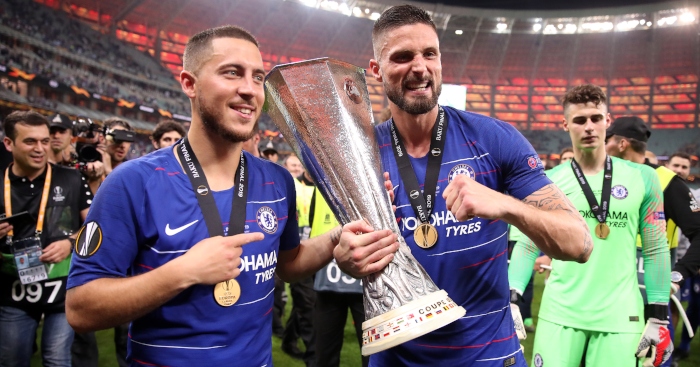 Olivier Giroud seemed to be caught in two minds about whether or not to celebrate after scoring in Chelsea‘s Europa League final win over Arsenal – but he had no such worries after the game.

Giroud opened the scoring four minutes into the second half in Baku on Wednesday night and initially celebrated only to then seemingly remember who he’d scored against and apologetically raise his arms.

Pedro made it 2-0 on the hour mark before Eden Hazard scored twice, either side of a consolation goal from Alex Iwobi, to wrap up a 4-1 win and secure silverware in what is expected to be his final appearance for the club.

Explaining his dilemma after the game, Giroud said: “These two clubs changed my life, they gave me the opportunity to play in the Premier League.

“I didn’t want to celebrate against Arsenal, but I am so proud to win this trophy with Chelsea. This team deserved to win something. It was special for me, I am happy for this club.”

Walking down the aisle of Chelsea’s team bus after the match, Europa League trophy in hand, Giroud seemed rather less concerned about the disappointment of his former club as he shouted “thank you Arsenal” to laughs from his team-mates.