Watch: Divock Origi hits bar after being played through one on one v Burnley 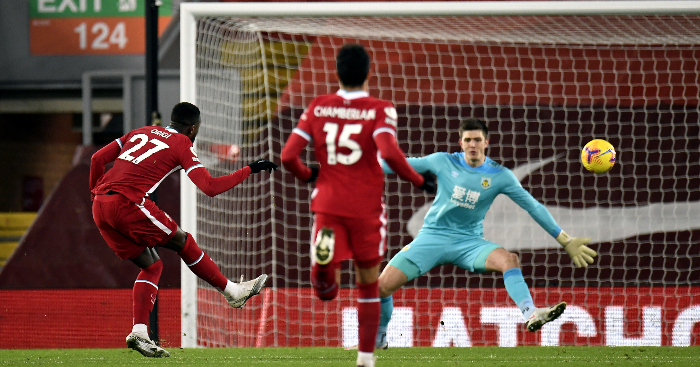 Liverpool fell six points behind Manchester United in the Premier League title race after losing 1-0 to Burnley on Thursday, but it all might have been so different had Divock Origi not squandered a brilliant chance.

Their first Premier League defeat at Anfield since April 2017, Liverpool were left immensely frustrated as they just couldn’t forge a breakthrough against Sean Dyche’s Clarets.

In his post-match interview, Jurgen Klopp stressed the importance of scoring the first goal against low-block opposition, and they had a glaring opportunity to do shortly before half-time.

Ben Mee was a rock at the heart of Burnley’s defence, but he was let off after an error nearly proved costly. A poor touch allowed Origi – given a rare chance with Roberto Firmino and Mohamed Salah rested – to go bearing down on goal, one on one with Nick Pope.

The Belgian took the ball down well and struck the ball with confidence. He beat the Burnley keeper, but just put a little too much behind it, as the ball rattled the underside of the crossbar and bounced back out.

Jamie Carragher was on co-commentary and you can almost hear the pain in his voice afterwards. He knew what a big moment it was.

The Premier League table based on the last 38 games: Man Utd above Liverpool