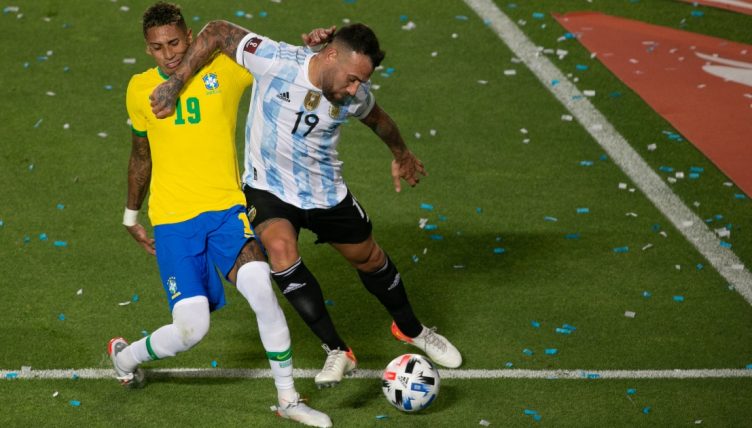 Argentina secured their place at next year’s World Cup with a 0-0 draw against Brazil but defender Nicolas Otamendi was lucky to escape a red card for his elbow on Leeds United winger Raphinha.

Otamendi, who used to play in the Premier League for Manchester City, was part of an Argentina backline that kept runaway group leaders Brazil out but he probably shouldn’t have stayed on the pitch for the game’s duration.

During the first half, the 33-year-old was attempting to shepherd the ball out of play when he came under pressure from Raphinha.

In response, Otamendi swung his elbow and caught Raphinha square in the mouth – which led to his opponent stuffing a wad of cotton wool in his mouth to stem the bleeding.

VAR checked the incident but decided the contact was not enough to warrant Otamendi’s expulsion.

The goalless draw was the first meeting of the two fierce rivals since September’s clash in Rio de Janeiro was suspended after seven minutes due to alleged breaches of COVID-19 protocols.

Both Argentina and Brazil will be present at Qatar 2022 and will arrive with ambitions of lifting the trophy.