Watch: Zaha is sent off for shoving Sanchez to the floor against Spurs 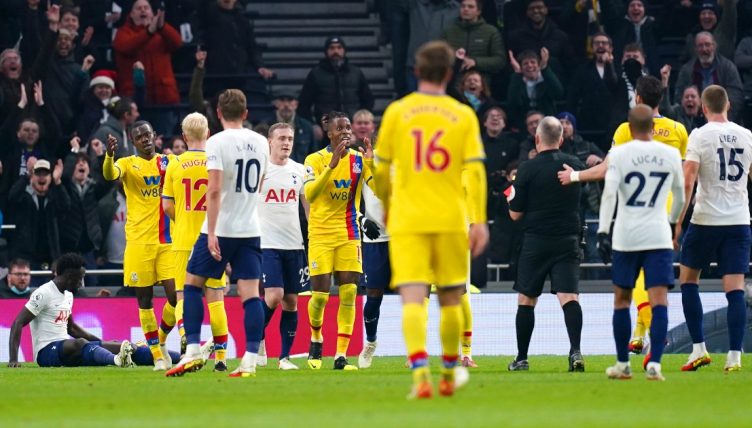 Wilfried Zaha was sent off against Tottenham Hotspur for Crystal Palace during their Premier League boxing day match.

The Ivory Coast received his second yellow card for shoving Spurs’ Davinson Sanchez to the floor.

It came in the 37th minute, with Palace already two down following goals from Harry Kane and Lucas Moura.

Zaha found himself battling with the ball with Sanchez by the sideline and when the Colombian defender tried defending the ball, Zaha shoved him to the ground causing uproar from the stands.

It prompted Jonathan Moss to walk over and show his Zaha second yellow and then give Palace’s talisman his marching orders.

Zaha could have had no complaints about the decision.

“The thing that sticks out for me most is that Wilfried Zaha is an experienced player,” Jermaine Jenas said whilst commentating on the match.

“This is a situation he deals with week in week out. If I’m a Palace player or a Palace fan… I’d think it’s ridiculous he’s still getting caught out in situations like this.”

Tottenham were in complete control from that moment onwards and Son Heung-min completed the win with his ninth goal of the season in the 74th minute.

Spurs currently sit fifth in the Premier League table and are six points behind Arsenal but have three games in hand over their north London rivals.

A moment of madness from Wilfried Zaha 😤

He receives his second yellow card for this shove on Davinson Sánchez! 🟥

From bad to worse for Crystal Palace… pic.twitter.com/sP6whMwezo