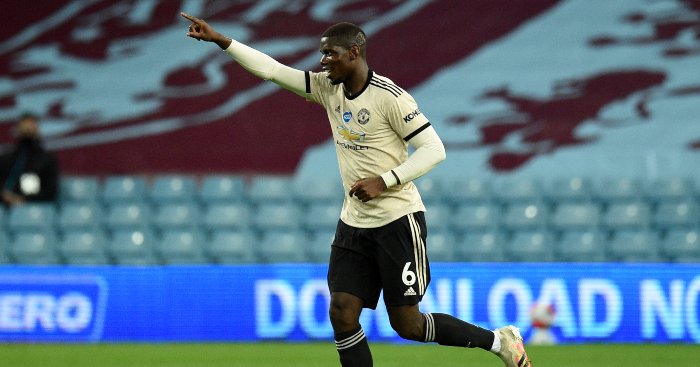 Roy Keane couldn’t resist a dig at Paul Pogba after Manchester United‘s 3-0 win over Aston Villa on Thursday night – but he got the perfect response from Patrice Evra and Pogba himself.

Pogba scored his first goal of the season with a crisp strike from the edge of the box as United enjoyed another dominant win in which Bruno Fernandes also got on the scoresheet.

After the game, Keane appeared to be trying to praise Pogba’s upturn in form with a backhanded compliment suggesting United’s new-look side suits the midfielder as he lacks the leadership skills to be the main man.

When Keane then suggested Pogba only wants to be the main man on social media, Evra laughed and told Keane he will send him any videos Pogba posts.

Patrice Evra:
"Maybe he [Paul Pogba] will do a dance in the locker room [of Manchester United] and I'll ask him to send me the video and I'll send it to Roy Keane."#AVLMUN #MUFC 🔴pic.twitter.com/YnIhbpgjAN

It just so happened that a video did surface online of Pogba and Bailly showing off some slick dance moves in the changing room.

The video appears to have been filmed earlier in the week rather than at Villa Park, but either way, we really hope Evra sent it Keane’s way.

Pogba and Bailly with the Zanku dance moves 😂🔥#MUFC pic.twitter.com/KXsoYeip0S