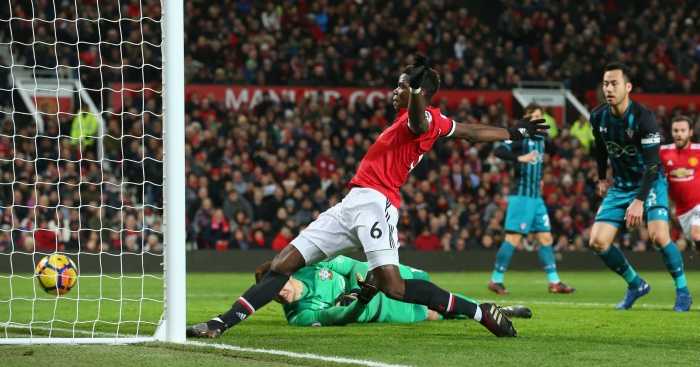 Manchester United played out a goalless draw with Southampton, but if it weren’t for Paul Pogba it could have been victory for Jose Mourinho’s men.

After a world class save from David De Gea, the match was halted for a long period as Romelu Lukaku required treatment for a nasty head injury.

De Gea needed to make a fingertip save to deny James Ward-Prowse after just seven minutes of the match in order to keep the scoreline level.

And that was shortly before Lukaku was stretchered off following a clash of heads with Southampton’s Wesley Hoedt.

Then with just 10 minutes to play, Pogba denied his side a victory by prodding in from an offside position. However the ball was already on its way in.

A free kick from the right dropped for Nemanja Matic, whose scuffed effort was bobbling towards the bottom corner, only for an offside Pogba to poke home from a yard out.

Watch the video below to judge for yourself whether the effort was indeed goalbound or not.