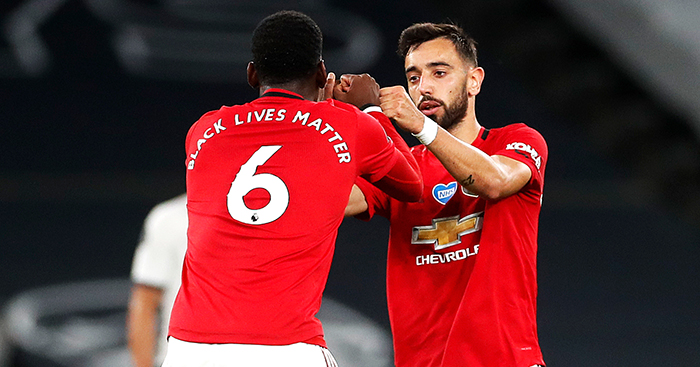 Paul Pogba started on the bench as Manchester United resumed their Premier League season with a 1-1 draw at Tottenham – but he is unlikely to remain there for long judging by his performance off the bench.

Pogba hadn’t played since December 26 due to an ankle injury, and Ole Gunnar Solskjaer kept him waiting a little longer on Friday night as he kept faith with the team that had put together an 11-match unbeaten run prior to the break.

However, United were struggling to find a way back into the game following Steven Bergwijn’s opener for Spurs until Solskjaer called for Pogba to replace Fred shortly after the hour mark.

The Frenchman’s introduction seemed to lift United and they were soon camped in Spurs territory, with Bruno Fernandes in particular seeming to enjoy the new Brogba partnership that fans have been getting excited about.

And nine minutes from time the pair combined to earn United a point, with Pogba drawing a foul from Eric Dier in the area and Fernandes dispatching the penalty to cap another fine display in red.

But while winning the penalty was undoubtedly Pogba’s most crucial contribution, it wasn’t nearly as sexy as this pass he played to Rashford. We won’t try to explain it because we won’t do it justice. Just watch it; it’s a thing of beauty.