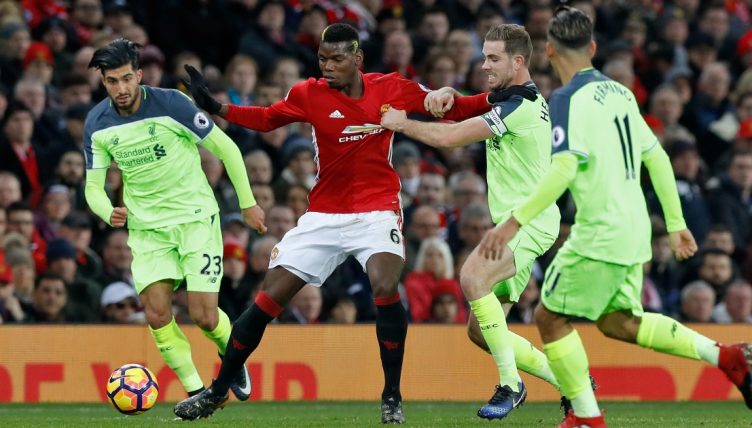 Manchester United midfielder Paul Pogba has revealed that former Liverpool midfielder Emre Can is the toughest opponent he’s faced in his career.

After spells at Bayern Munich and Bayer Leverkusen, Can joined Brendan Rodgers’ Liverpool in a £9.75million deal in the summer of 2014.

The midfielder registered 14 goals and 12 assists in 166 appearances for the Reds before deciding to join Juventus on a free transfer in 2018.

During his time on Merseyside, he went head-to-head with Pogba on two separate occasions in games between Liverpool and United.

The first game ended with a 0-0 draw at Anfield in October 2016 before goals from James Milner and Zlatan Ibrahimovic made it 1-1 at Old Trafford in January 2017.

They have also faced each other at international level on three occasions, most recently at last summer’s Euros. Despite France registering 2-0 wins in all three of those games against Germany, Pogba clearly appreciates Can’s ability.

“Emre Can, yeah,” Pogba told Football Joe when asked about his toughest opponent. “We obviously have N’Golo [Kante] and everything, but one day I remember I had a big battle with Emre Can. But with Kante, you pass him and you think there’s another N’Golo because he comes back so fast.”

After leaving Liverpool in 2018, Can won two Serie A titles and a Supercopa Italiana before returning to the Bundesliga with Borussia Dortmund in 2020.

The 28-year-old reportedly had to chance to play alongside Pogba at Old Trafford but rejected United’s transfer offer due to his Liverpool connections.

“I didn’t think about this [joining United] for a second because of my Liverpool past,” Can told kicker. “I had three offers from Premier League alone.

“There was one from Manchester United. But I did not think about this for one second because of my Liverpool past.”

Pogba just said Emre Can was the hardest player he's ever played against 😭 pic.twitter.com/sAjFhDnJhl