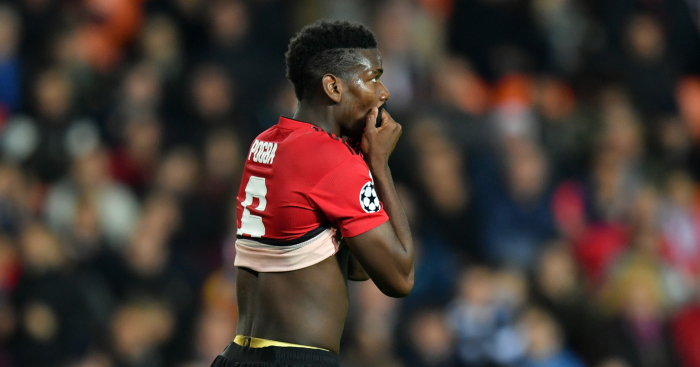 Manchester United were left to rue a host of individual errors as they missed out on the chance to top their Champions League group with a 2-1 defeat at Valencia.

Jose Mourinho’s side were already assured of qualification, but Juventus’ surprise defeat to Young Boys meant they could have leapfrogged the Italian giants with a win in Spain.

But United found themselves 2-0 down after Carlos Soler’s opener and a comical Phil Jones own goal.

Marcus Rashford pulled a goal back late on, but the Red Devils failed to find an equaliser.

Paul Pogba had been given a chance to work his way back into favour for Sunday’s clash with Liverpool by being handed a start, having been left out of United’s 4-1 win over Fulham at the weekend.

Mourinho had urged Pogba to make a “good impact”, but the midfielder again failed to impress and attracted the wrong kind of attention when he missed a golden opportunity from four yards, although he had been wrongly flagged offside.

Is he playing for Manchester United or for Juventus?!?! pic.twitter.com/uD8bvYmHFO