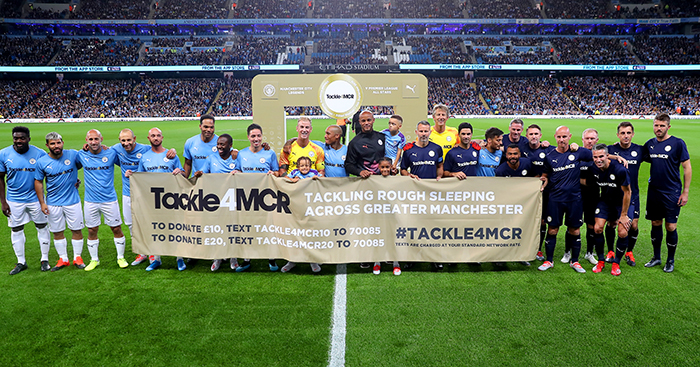 There were plenty of stars on show for Vincent Kompany’s testimonial on Wednesday night – but Paul Scholes still managed to steal the show with a frankly ridiculous piece of skill.

A Manchester City Legends team drew 2-2 with a Premier League All-Stars outfit at the Etihad Stadium, with Martin Petrov and Benjani scoring early and late for the Blues, sandwiching goals from Robbie Keane and Robin van Persie.

Along with Gary Neville and Jamie Carragher, Scholes was one of the pantomime villains for the City fans in attendance, but it would have taken a dark soul not to have been uplifted by a touch of genius from the former United midfielder just before the hour mark.

Mikel Arteta clipped a ball to him in the centre circle and with possibly the most nonchalant swing of a boot a footballer has ever produced, Scholes casually diverted it into the path of Robin van Persie, completely and utterly bamboozling Joleon Lescott.

It came to nothing, but still, bloody hell.

This pass from Paul Scholes is outrageous🤯 pic.twitter.com/qfpOISYQQL